The idea for the QuadStick came from an interview with Ken Yankelevitz about his QuadControl joystick for Quadriplegics. The article mentioned Ken’s desire to find someone to continue his work.

Having developed many digital hardware and software products, including the board layout and manufacturing setup for more than a dozen circuit boards, and having worked on numerous software projects in a variety of languages, I knew I had the ability to design a joystick that would continue the work.

Ken had started. Ever since a member of my family was victimized by Lou Gehrig’s disease, I have been looking for an opportunity to apply my skill set towards something that would be of benefit to someone in a similar situation. 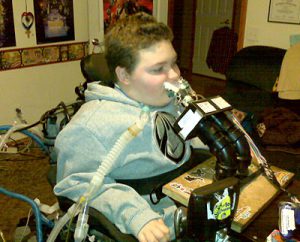 Once I saw this picture on the Ken’s website, I knew I had found that opportunity and contacted Ken. The goals of the QuadStick are to provide an inexpensive, self contained tool that allows the disabled gamer to play video games at a high level and participate as an equal in the social communities that form around them.

In June 2013, I was contacted by Matt Victor, a C1 quadriplegic and customer of Ken’s, who offered to test the QuadStick and give feedback and advice, which resulted in many changes during the development.

In the beginning of 2014, a successful Kickstarter campaign, backed by these generous individuals, launched production of the QuadStick.